So, it took me a bit logner to get through Polgara the Sorceress than previous volumes in the David Eddings series, but she's also a longer read and I was on vacation for five days in there. (DC. There were Pandas.) 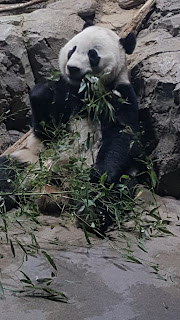 As Ce'Nedra complained at the end of Belgarath, the preseries story was unfinished, since Polgara has a story of her own. The Riven Queen and Garion go east to the vale and enlist Poledra to get Polgara to write out her story. Which she does eventually.

Much like Belgarath, Polgara tends to litter her narrative with the occasional aside poking fun at fictional readers of her manuscript. Which helps to lighten up the occasionally dark narrative.

By far the biggest change with Pol is that Polgara is aware that Poledra lived past her birth, as Poledra remains in contact with her throughout her life. Polgara, being a twin, loses her other half at 16 when Beldara marries Riva. Beldara manages to get Polgara out of her awkward and unkempt stage prior to marriage, although Beldaran's eventual death marks the start of deaths that will haunt her through the narrative.

We see much of her learning through her eyes and get the other half of the story told in her father's book, including that her mother was also instructing her. Until she eventually winds up in war torn Arendia to end the civil war, however temporarily. Mind you, she more or less bullies the three Duchies into behaving themselves and gets given her own Duchy, Erat, as a reward. Vo Wacune falls and so does her almost lover Ontrose with it. While Ontrose's death is very hard on her, it doesn't stop her from her duty as Duchess, helping the refugee Wacites settle in to Erat as it becomes Sendaria and destroying the Asturian raiders. She convinces one of the Tonedran Emporers to get a king in Sendaria, and thus her land becomes an independent nation.

After that adventure, she becomes the guardian of the Rivan line, as she fishes the heir, Geran, out of the bay and takes him back to her estate in Sendaria. We hear of her moving around with the heirs and making them vanish into obscurity until Torak's invasion of the West. The heir at the time goes into hiding in Algaria, while Pol and Belgarath get the forces running at Vo Mimbre. We hear of how she and Poledra combine into one particular owl to spy on Torak and Zedar during the siege. And how it was Poledra who helped her resist Torak's proposal on the third day.

We hear of the heir's mental subjugation to Chamdar and subsequent exposure to Chamdar's thoughts, and the later move into Cherek. Finally, the century of the Godslayer arrives and Polgara can finally move back to Sendaria. Which is probably the saddest chapter in the entire book as we learn of the fates of Garion's grandparents and the eventual fire that takes out his parents. And we hear of the move to Faldor's farm and Polgara's eventual acknowledgement of her love for her father.

Polgara is quite a bit more intimate than Belgarath. This is likely because Polgara is younger than Belgarath, and she's much more involved in the day to day history of the world than Belgarath is. It's a wonderful ending to the series, and a reminder of sacrifices made to bring about the changes we need in the world.
Posted by James at 8:28 PM

Email ThisBlogThis!Share to TwitterShare to FacebookShare to Pinterest
Labels: David Eddings, The Belgariad, The Mallorean