I'm a Djinn in a bottle baby

Finally getting a chance to return to Benedict Jacka's Alex Verus series, with Marked finally showing up. Again we're knee deep in politics, but hey, it's fun.

Basically, with Alex's boss Morden in prison, Alex has been given Morden's position as Junior Councillor on the Light Council. Which really does paint a fairly large target on his back, since 3 of the 7 voting members want him dead.

The problems start arising when Anne, Alex's Life Mage love interest, starts showing signs of being possessed by a Djinn from a raid on a magical artifact vault in previous volumes.

Well, that, and an attempt to get Morden to cooperate to bring down Richard Drakh, Alex's former mentor, who's currently trying to get the adepts to unite with the Dark Mages against the Light Council.

Essentially, none of this works out well for anyone involved, particularly when we start seeing signs of Anne's "other half" coming through again. (Anne has pretty much channeled all of her aggression and anger into another personality that has a life of its own.)

It's a good read, although this series is becoming rather hard to read as stand alone, given the amount of metaplot being woven in. On the other hand, given Jim Butcher's glacial release schedule these days, I'll happily lap up a similar series that's just as involving.
Posted by James at 9:12 PM No comments:

I'm beginning to get the jokes about Florida Man

Evidently I picked up Dark Light by Randy Wayne White at one of the many book sales I've hit over the past few years. As I was waiting on reserves to come in, I ended up grabbing it of of one of the unprocessed bags I have floating around full of used books.

Now the cover suggested supernatural, but but the prose itself is fairly grounded in reality, other than standard wish fulfillment, as our main character, Doc Ford, is a marine biologist who's also trained in 30 ways to kill a man.

Which will come in handy, as Sanibel Island, off the coast of Florida by Sarasota, has just undergone being in the eye of a Category 4. This sets up plot thread one, as the Indian Harbor Marina is currently defrauding customers by claiming all the boats were destroyed by the storm then keeping all the boats that weren't to either use or sell. Plot thread two involves one of the locals finding a ship that's been unearthed on the bottom of the Gulf that has some fairly valuable salvage.

Then Doc meets Chestra, a fairly young elderly woman living in an estate by the water with a story to tell about a relative of hers who died during a hurricane that passed through in the 1940's. Her story intersects with the story of Bern, who owns the Indian Harbor Marina, who's also been raping and killing young women on the island and back in Wisconsin.

All of which gets wrapped up in a story involving World War II escaped Nazi POWs who were in southern Florida, which explains the diamond encrusted Nazi emblem from the wreck of the Dark Light.

I will say the book kept my attention, made me seasick in a few points, and remained readable. But... it also was really odd in its resolution (whether or not Chestra was who she said she was), and the narration keeps switching from first to third person, which also means most of the bigger secrets are already revealled before other people know them. I may check out some of the other volumes at some point, but not right now.
Posted by James at 8:46 PM No comments:

The copyright on Raven Hart's The Vampire's Revenge dates back to 2009, which would suggest that we're not going to see another book in the series, which is too bad, since this volume leaves several story lines unfinished.

After the really major events of the previous volume, we're down to just Jack narrating the emergence of the Slayer (his sort of girlfriend Connie), the war with the double-deads, and the joys of his grandsire Reedreck, greatgrandsire Ulrich, and his maker's mortal wife now evil vampire Diana.

Connie is still quite crazed as the Slayer at the outset, taunting and teasing Jack as they hunt down the vampires who managed to return from Hell during the brief opening of the gates in the previous volume. As we found out in the previous volume, said sould had the option to return to their own remade bodies or switching bodies with a mortal. Eleanor, Jack's sister in vampirehood, is one of the latter, having thrown one of her previous employees into a crow.

Eleanor has an agenda beyond Jack, she's out to get Diana for taking William away from her. Which means she's switching bodies right and left to get her revenge. Problem being, many of the double dead have similar ideas, leading to a really confusing St. Patrick's Day. This gets fixed with Olivia coming back briefly to summon two Celtic deities to take care of the problem.

Then we get Diana and Ulrich trying to poison the water supplies of both South Carolina and Georgia with radioactive waste.

And Connie trying to kill Jack, until about halfway through, when he manages to flip her human switch. Doesn't change that she's shacked up with his friend Seth.

Oh yes, and people who aren't dead or dying are leaving. We lose Melaphia and Renee to Melaphia's ex husband early on, then towards the end, the Egyptian were sogs take off. Add to that the return of Will, who loses his cool over the loss of his Dad and Connie and Seth likely trapped on an island that inspired Brigadoon... Yeah, I'm a bit sad that the series never continued.

It's been a fun series, and I will hold out hope it eventually comes to a better conclusion.
Posted by James at 8:14 PM No comments:

There are more things in heaven and earth, Horatio, Than are dreamt of in your philosophy.

I feel like this review of Whitley Strieber's Communion would be incomplete without digging out this old chestnut. 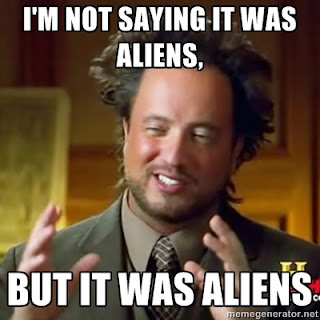 For those who maybe weren't around in the 80's, or not paying attention in the 80's, this is Mr. Streiber's account of his history of being abducted by these guys. 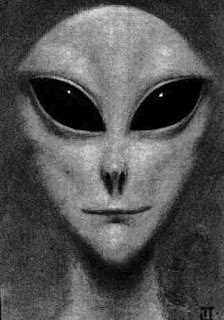 Indeed, while the tales of the Greys might have predated this book, it did make them a quite popular image of possible extraterrestrial life.

So, what's interesting to me about this is that most alien abduction stories have the big reveal at the end of the story; even in nonfiction accounts such as this, we normally hear about missing time, strange dreams, and disappearing rednecks long before we get the money shot of 4 feet tall beings with giant black eyes that like to probe humanity. Not so here. Streiber recounts his October 1985 kidnapping within the first few pages, then spends the rest of the book discussing how he came to recover memories of other visitations as well as a rather lengthy discussion of what these visitations could possibly be and possible evidence of alien visitation throughout history towards the end.

Summed up, Mr. Streiber undergoes hypnosis with doctors who have no idea at first what it is he's digging at, recalls not only two encounters in 1985 but visitations at 5 years of age and a few others at other points in adolescence, recounts a group therapy session with other abductees, and involves trying to verify specific events with other possible witnesses. These include his wife, who also undergoes hypnosis, although they try not to involve the son. Despite that, his son does have a few recollections that line up with the events as described.

While Streiber spends all of this describing himself as agnostic towards the reality of the experience, it's fairly obvious he things something happened, although he's not totally convinced its actual aliens, because it could also be future humans traveling through time, or alternate dimensional visitors, or any number of things that aren't a bit of undigested roast beef.

I think the big question any reader of this is going to have revolves around whether or not it's all made up. I can't answer that question. While I tend to give some credit to the idea of Visitors, it's not something I can speak to from personal experience. I can, however speak from personal experience on people claiming I made something up, that I must be misremembering, etc. I also find myself dealing with the old argument about recovered memories, which largely gets brought up against more normal things like people remembering sexual abuse or Satanic rituals at daycare.

Again, this blog is no place for the discussion of validity of such things.

Suffice it to say, the last chapter dealing with philosophy and possible Visitor interaction  throughout history is interesting, although it really goes far afield from the rest of the fairly straightforward narrative, as we discuss things like the meanings of triangles in relation to eternity; indeed, three becomes a magic number.

So yeah. In the end, I feel about as agnostic towards the entire recounting as Streiber himself claims to be.

There are a lot of things going on in Raven Hart's The Vampire's Betrayal. While not all of them are original ideas, they're still quite entertaining.

As we sort of saw at the end of the last volume, Renee and William are home following events in England, arriving just in time for Connie to cross the line between life an death in an attempt to meet up with the soul of her son and ex husband. Since Melaphia has no intention of bringing her back, since she's the Slayer prophesied in a few ancient traditions, Jack invokes Papa Legba and goes to the other side to bring Connie back. While he's there, he witnesses the angels giving Connie her marching orders.

William, on the other hand, is a bit busy with issues of his own, such as dealing with ongoing plots from the vampire council and dealing with the fact that killing off one of his children has made her a sluagh, as vampires who die get special punishments, and this child in particular holds a grudge like a Sicilian.

Anyway, most of the focus in this one is on Jack, who's trying to reconcile his love of Connie with the fact that she's destined to kill him and every other vampire. He resigns himself to killing her before she comes into her powers, but stops himself when he hears a second heartbeat in her womb, which means he's just sired a baby dhampir, which is likely going to also be a bad thing. (Dhampirs are traditionally children born of a vampire parent and a human parent. Usually they get really coolk vampire hunting powers.)

As everyone could have guessed, Connie finds out about most of the backstabbing, then gets hit with her activation at the worst possible moment. We also have a few fairly major developments in the lifestyles on the Savannah Vampires, which should make book five that much more interesting.

As I stated at the outset, none of this is particularly original, and I had to remind myself these were written in the early mid 00's, thus all the 2012 references. However, it's well written and well paced, which makes most of the egregious sins quite forgivable.
Posted by James at 8:39 PM No comments: