So, the past few days, I've been slowly devouring the second book (in order of the way they were written) of Lois McMaster Bujold's World of the Five Gods, Paladin of Souls.

Much like the first book, it's a rich feast, although less broad in its scope than its predecessor.

We open following the funeral of the old Provincara, who's firm grip has kept Valenda running through the years. Her daughter, the Dowager Royina Ista, long thought mad, is annoyed to be cooped up in her mother's house, expected to either take her mother's seat or worse be kept away from society as the presumed mad woman everyone thought she was. (Following the lifting of the curse in the last book, Ista's back to semi-normal.)

A chance meeting with a pilgrimage passing through Valenda inspires Ista with the idea of escaping her hereditary prison, a small pilgrimage of her own, under the pretense of praying for her daughter, the Royesse Iselle and her Royce-Consort Bergon to have a son. After imploring Chancellor Cazaril, the Dy Gurda brothers, Foix and Ferda ride down with a small company to accompany the pilgrimage, and a last minute substitution leads to Learned dy Cabon, a priest of the Bastard, to be the spiritual conductor of the event, much to the wailing and gnashing of teeth by those who love Ista and wish to show that love by confining her.

The pilgrimage proceeds fairly normally at first, with Ista riding under an assumed name and a courier named Liss roped into playing Lady-in-Waiting. We meet much of the accompanying party, and like Ista begin to know and love them. Problems begin to arise when a demon possessed bear attacks Ista on the road, only to be slain by Foix. As demons in this setting are prone to doing, the demon hitches a ride with Foix. Not long after, the party runs afoul of a Roknari raiding party out of Jokona. By now Ista has dreamed of a man, while Learned dy Cabon has dreamed of his death in just such an event.

With a bunch of moving around, Ista gets captured while most of the party escapes. Ista does get rescued a province north of where she was captured by Lord Arhys, who's castle, Porifors guards the pass into enemy Jokona.

Problem of course being that things at Porifors aren't exactly as cut and dried as the seem, what with Arhys's demon possessed bride Cattilara, his seemingly ill bastard half-brother Illvin appearing in Ista's dreams, and as we find later on, a dead lord reanimated by one very annoyed demon who wasn't expecting his wife to be quite as strong willed, given that Cattilara is first described by her brother-in-law as the type you could put a candle by one ear and blow it out thorough the other. (That's a paraphrase, and close enough to the original quote.)

Quite a puzzle to unravel, particularly when The Bastard entices Ista into taking on some of his gifts, like second sight. The complex mess gets more interesting as members of the original party return, and Prince Sordso of Jokona shows up with his Regent mother, Joen. Which is about the time we start figuring out how all of this ties in with the fist book, and eventually some very well written moments as the knot becomes untangled.


There are a few passages of breathtaking beauty in these pages, not the least of which involves finding a way to get Arhys free of his theological damnation/sundering, or when Ista finally forgives herself, her husband, and his lover (the lover who also happens to be Arhys's father) for what happened prior to the first book.

To be sure, this is another one I'd recommend to folks, but only after they read The Curse of Chalion.
Posted by James at 12:56 PM No comments:

An invitation you can't refuse

I was fairly unaware that The Long Cosmos even existed, figuring that given Terry Pratchett died not long before The Long Utopia was released, Lobsang's voyage to the outer realms was the end of it.

However, It seems that Stephen Baxter had enough material to finish the series, and thus we get the voyage of Joshua Valiente one more time.

There's a lot happening in this one, (not that there isn't in all 5 volumes), Starting with Josh, essentially estranged from his children venturing off into the high meggers in his 70's. Nelson, the Anglican priest, gets a notice from some algorithm of Lobsang that he has a grandson. And everyone on all of the long earths gets an invitation to "Join us". Near as SETI projects can pinpoint it, coming from somewhere near Sagittarius. (Doesn't hurt that even the non human sapient species hear the call.)

The Next end up dragging in normal humans to help build The Thinker, a giant AI encoded in the Invitation.

Josh ends up in serious trouble with injuries and winds up being cared for by Trolls until his son Rob comes to rescue him. Followed almost as quickly by Josh and his troll friend Sancho rescuing Rob on an alternate Earth filled with hydrogen trees.

Nelson goes with Lobsang's adopted son into the simulation where Lobsang is currently hiding after meeting his grandson, who vanishes along with a Traveler that Nelson's family was living on stepped away.

Which eventually means every surviving major character from the series winds up on one of the Pi Earths that houses The Thinker. And eventually, the invitation is answered.

We never do get a more philosophical answer as to what it all means, although Sancho's thoughts on the matter are probably the truest of all of them.

I'm not sorry I read this, but I'm kind of happy it's officially over now.
Posted by James at 9:37 AM No comments:

Well, as sort of promised, I did track down the next book in Laura Resnick's Esther Diamond series recently. Due to a bunch of personal stuff, this review is going up a few days late, but ya know, here we go.

Doppelgangster picks up with Esther's stage show being cancelled, requiring her to start working on Mulberry St. in Lower Manhattan at a place called Bella Stella, where the wait staff sings upon customer request. Most of the clientele are Made Men. (For those not in the know, Mulberry St. is in the heart of Little Italy. Try as I could, I never did make it there when I was in New York last week.) This creates conflict with her sort of boyfriend, Detective Lopez, since he's now part of the Organize Crime team with the NYPD.

However, things get off to an ugly start when first she serves Chubby Charlie, then runs into Chubby Charlie again after her shift is over, as he's walking into Bella Stella with no memory at all of having been in there the first time. The next night, he's in again, terrified, having seen his perfect doppio, which to him, means certain death. A prediction that comes true, since he winds up being shot by an impossible bullet in the middle of the entree.

This gets Esther back in with Max and a man named Lucky, and thanks to a play on words, the perfect doubles running around become known as Doppelgansters. (Given the doubles are mostly of mafia folks, it plays well with the original term, doppelganger.)

Things continue to go south throughout the book, as doubles of major characters show up, people die as a prelude to a mob war, and Esther keeps getting threatened with a Material Witness warrant by Lopez's boss. Not that Lopez is happy about Esther running around with the mob, but ya know.... When Evil is running amok, so are Esther and Max.

A fun entry, even if I did figure out one of the parties responsible as well as how the doppios were being created well before the narrative did. Will have top start tracking down more of the series when I get my personal crap better straightened out.
Posted by James at 10:34 AM No comments:

I knew when I started reading Gene DeWeese's Lord of the Necropolis, this picture was going to show up in the review. 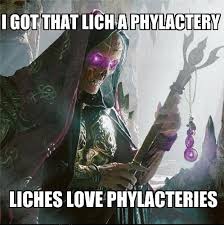 Mainly because it covers, in the timeline of Ravenloft, the Grand Conjunction as well as the rise of the Necropolis from within the kingdom of Darkon during the Requiem, all from the point of view of Azalin, the lich lord of Darkon.

A quick bit of history for those not versed in Dungeons & Dragons who stumbled in to this. Ravenloft was a campaign setting for Dungeons & Dragons that made it possible to have adventures in cheap rip offs/homages of Gothic horror. The realm got its start (and name) from an adventure centered on a vampire named Strahd, and his rather tragic fall from grace. It proved popular enough that Strahd, his castle, and quite a bit of his domain got sucked into the Ethereal Plane and became the linchpin of a new campaign world of tortured Darklords.

A few problems though. Evidently, this one, unlike its predecessor (King of the Dead, also by DeWeese), is considered non-canonical. Second, the very things that made the adventures so much fun to play through are kind of missing in the prose.

See, the first half of the book deals with Azalin going back to Strahd's Barovia prior to its entrance to the mist. (Using a proxy phylactery embedded in a Vistani ally.) Instead of what happened in the modules, we instead get some silliness about Azalin taking the body of the Lieutenant Strahd killed at the time of the cursing.

Then we get into the Requiem. Wherein Azalin finds a machine made of both science and magic, makes a lesser version, which creates the being that would later rule the Domain of Necropolis as Death, as well as managing to disintegrate Azalin when he enters the bigger version.

Honestly, it wasn't as good as I was hoping, but that's long been an issue with the Ravenloft novels... If the Darklord(s) is the focus, it generally isn't a good read. If they aren't in it at all, or left as a minor character, they usually become quite fun to read, in a cheesy pulpy kind of way. (Although what usually makes the Darklords so boring to read is that they're often rehashing a better source material, like Frankenstein or The Strange Case of Dr Jekyll and Mr Hyde. Not always true, as Lord Soth's Entrance and Exit to the mists were actually fun to read, even if legions of Dragonlance fans screamed in protest that their favorite scene stealing Death Knight got yanked out of Krynn.[And let's be honest. Soth's creators weren't happy about it, and Soth's curse in the myths really didn't capture the horror of the curse he had on Krynn. /nerd off] I'd also be remiss if I didn't mention that Laurell K. Hamilton wrote a Ravenloft novel at one point. I actually have it on the shelf, but...)

It's a readable book. Azalin is a tragic character in many ways. But it made me long for what White Wolf managed to do long after the heyday of D&D novels... make a book that captures both the spirit and the sense of adventure of the game itself.