(Note: This is a concurrent post with Candy-Coated Razor Blades by my friend Bob. He's covering movies. I'm covering the writing.)

That is not dead which can eternal lie.
And with strange aeons even death may die.

I'll confess, I'm a Cthulhu groupie. (There used to be cultists, but since Cthulhu went mainstream... It used to be one had go diving beneath the waters or go hit up profane cults in isolated places to get icons. These days, one can go to a store and buy all the iconography you want of he who lies dreaming.) 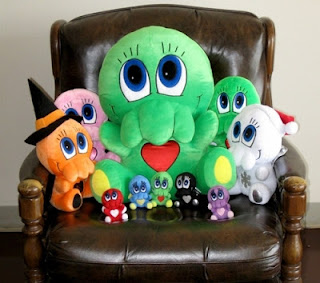 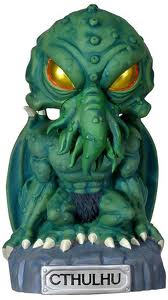 I'll also confess I'm not fond of H. P. Lovecraft's writing. It's a bit like reading Hawthorne, if Hawthorne had Hester giving birth to alien babies after Dimmesdale himself found out he was a hybrid of normal isolated New Englanders and underwater fish people. 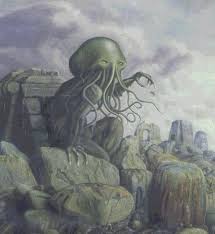 Seriously. That's Baby Pearl up there.

(This must just be a Southern New England thing. Writers from Northern New England tend to write like a tabloid reporter. "Captain Trips is taking out 99.4% of the world's population, and Frannie's pregnant!!")

Lovecraft is quite a bit like Bob Dylan. I much prefer his stuff when it's done by someone else.

(I'll be citing examples here in a sec.)

But, the real reason I'm writing this has to do with The Lovecraft Anthology Vol. 1, edited by Dan Lockwood, that turns HP Lovecraft's words into illustrated graphic novels. Or graphic short stories, to be more precise. This particular collection includes " The Call of Cthulhu", " "The Haunter of the Dark", "The Dunwich Horror", "The Colour Out of Space", "The Shadow Over Innsmouth", "The Rats in the Walls", and "Dagon". It makes Lovecraft's words much more accessible to the readers who may have run across Cthulhu in other places and tried to find the source.

But then, based on what I've read, Lovecraft never really set his pantheon in stone, preferring to use it as  background noise, for lack of a better term. What does emerge from what he wrote (usually based around Arkham, Massachusetts, or Miskatonic University, or some isolated New England backwater) is the idea of the Outer Ones (Like Azathoth, the blind idiot god at the center of the universe), Great Old Ones (like Cthulhu, sunken in his house at R'lyeh), and lesser horrors (The shoggoths, more or less used as slave labor and the Mi-go, who either worship Nyarlathotep or are at war with the elder gods. Given how many people who have worked in the mythos, this kind of confusion is bound to arise. However, just keep in mind that this is like Alien vs. Predator. Whoever wins, we lose.)

We also have what generally remains a pattern in Lovecraft's fiction. The narrator reads someone else's mad ravings, investigates, then goes mad himself. Mind you, if I, like our narrator in "At the Mountains of Madness" ran across 5 foot tall penguins being used as cattle for either the shoggoths or Cthulhu himself, I think I might go a little mad as well.

Cthulhu has become a cultural icon of sorts the farther from the original writings we get. From the RPGs The Call of Cthulhu and Cthulhu Tech to movies, books and graphic novels...

Cthulhu shows up briefly in The League of Extraordinary Gentlemen: Black Dossier. Cthulhu shows up fighting beat poets in Nick Mamatas's Move Under Ground. An entire graphic novel series entitled The Fall of Cthulhu concerns The Harlot fighting Nyarlathotep as the latter tries to wake up Cthulhu.

We have Brian Lumley's non-vampire series concerning the Dreamlands. (I liked these a bit better than Necroscope. That one got a bit confusing after a while, what with time travel, psychics, vampire planets and all. Fun to read, but I really needed a damn flow chart to keep up with it.)

There's also Mick Ferrin's very wonderful Victor Renquist Quartet, where Cthulhu shows up in Book 2, Darklost. In that appearance, Cthulhu ties in with the vampire mythos Ferrin created as something of an enforcer the Nephilim created to keep the Nosferatu in line. Mind you, Merlin shows up in book 3, and book 4 concerns Nazis in the Hollow Earth, but the series itself is a wonderful read. The vampires aren't mindless antagonists, nor are they Twilight sparklers. (Seriously. Find copies of The Time of Feasting and keep reading.)

If you like a little humor with your insanity inspiring pantheon, there's The Eldritch Pastiche From Beyond the Shadow of Horror by Christopher Welch (from the Blood Lite anthology. This one gets a shout out, since I've felt much like the narrator on more than a few occasions.)

There's even a Dr. Seuss version of Cthulhu out there.

And of course, more recently, there's The Six Gun Tarot by R. S. Belcher, which I reviewed previously on here.

In all honesty, as bad as his writing is, H.P. Lovecraft's influence is felt far and wide in contemporary horror. And really, if you can find a good introduction, the writing gets easier to plow through.

I leave you and your sanity with the following.

In his house at R'lyeh, dead Cthulhu waits dreaming.
Posted by James at 5:04 PM